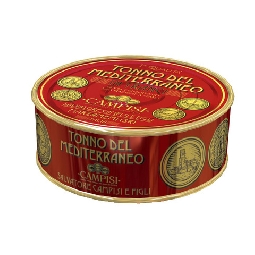 From five generations the company Campisi is preparing and preserving fishing of the Sicilian Coasts on the Mediterranean Sea, confirming each year the high top quality and genuineness of its products. It's situated in a small sea village near Pachino, called Marzamemi; all Campisi family, managed by Mr. Paolo, is working and preparing fresh fish in artisanal way (only native fish from their coasts). This Red Tuna, the best and precious one, is caught by fishing rod and prepared when fresh, keeping an extraordinary texture; the so soft flesh is never fat or acidulous. It's perfect tasted on salad, but also for simple sauces not dominating the delicacy of this product.The Campisi tuna is caught exclusively in the Ionian Sea and the Mediterranean. Today, it is still processed by hand according to the ancient craft tradition.

Campisi uses in the production of various tuna products their long experience of the company. In this case, the taste, the quality and the tradition are of particular importance.

The tuna is fished exclusively with the hook. This is how the meat preserves its high quality and the incomparable taste.

The Campisi company is a member of the Dolphin Safe organization.

The tuna caught in the Italian seas is mainly fished near Sicily. Because of its similar taste, the Mediterranean tuna can be considered as the cousin of bluefin tuna.